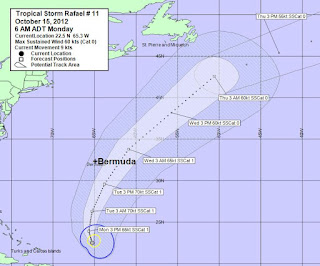 Our situation improves, although we are not comfortable with the forecast by any means.

Bermuda is now outside of the area forecast to suffer Tropical Storm force winds.  However, the local marine forecast continues to include a prediction of possible gusts to 65 knots.  That's a ton of breeze!!

So, its off to Hamilton for us now (Monday AM) and a hope that we will be able to get a berth at the Royal Bermuda Yacht Club.  RBYC is nicely positioned in the lee of some relatively large hills and buildings that should block the worst of the winds nicely.

That's the plan for now.  Let's see how it turns out!