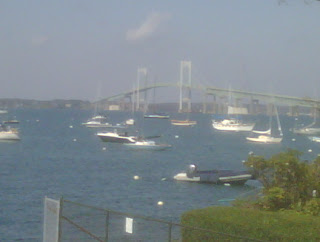 Morpheus seems very happy anchored off Newport. What a great Summer we have had. We head South in about three weeks, unless the temperatures really drop it's going to be difficult to leave...
Sent via BlackBerry by AT&T
at 8:46 AM No comments:

Out with the bad, in with the good!! 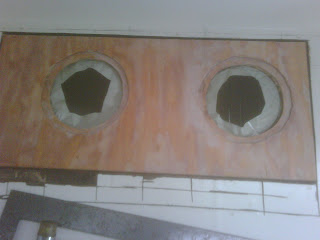 Almost ready for lamination!
Sent via BlackBerry by AT&T
at 7:16 AM No comments:

Maine - I need to go back sometime soon! 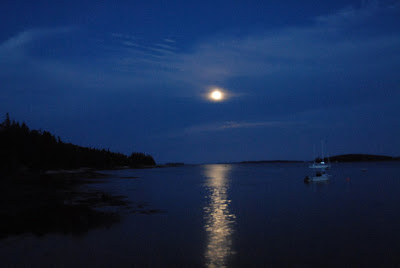 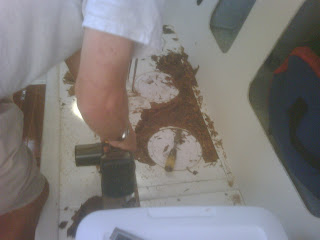 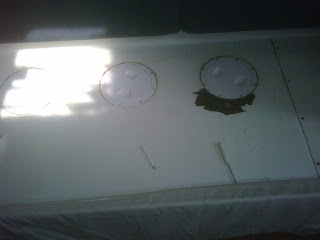 This always happens! Right when you think you've got your list of things to do toally under control, you are presented with a new "opportunity"!! This time, I find that the plywood core of my watertank has soaked up some of that water and is now rotten and in need of replacement!
Sent via BlackBerry by AT&T
at 10:12 AM No comments:

You have to love West Marine 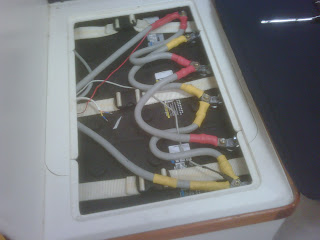 3 new 8D AGM batteries installed after a warranty return with zero hassle!! Well done West Marine....
Sent via BlackBerry by AT&T
at 11:54 AM No comments:

With about a month left before we push off for the Caribbean, we've been busy this week making lists, working on boat projects and sorting through our stuff to figure out what leaves with us on the boat and what stays in the trailer until we return next May.

My big project this week has been working on the ships power.  Our batteries seem to be losing their power progressively as each charging cycle seems to take more time and fuel, and returns the batteries to a state slightly lower than the time before.  Overall this is NOT a good situation.

We just replaced our batteries last October before leaving, and previous batteries had lasted much longer.  West Marine has agreed to a warranty replacement which is great, but I need to make sure that all of our systems onboard are set up properly and have nothing to do with this problem.

I'm also going to add some solar panels for some additional charging to save on fuel and engine wear and tear.

Once we finish with this there are a hundred other little projects on the list.  Nothing big enough to slow us down, but all worth doing prior to leaving this area where we have access to any parts/service that we might need.

I’ve just finished sailing in the New York Yacht Club Invitational Cup.  I was lucky enough to be able to act as Gibb Kane's owners representative onboard his Swan 42 Mutiny which was sailed by a Team from the Royal Hong Kong Yacht Club.

Team Hong Kong started out strong and finished the first day of the regatta in 2nd place. We spent many races sailing at the front of the fleet, but unfortunately there were a few where we didn't fare quite so well.  In the end, it was a fantastic week of sailing and socializing and we ended up 9th out of 22 teams.

To both Gibb Kane and the team from the RHKYC, thank  you for the opportunity.  I enjoyed the week and the opportunity to meet and sail with a new group of people.

Some pictures of the event and our team follow below....

The Boats had a parade in front of the Newport Boat Show this am before the last day of racing.
at 9:59 AM No comments:

We are sitting in 5th place after three days with two more to go. Plenty of opportunity to move up or down from here. The video footage from the racing makes it look even better than when you are there!! -JIm
at 6:42 PM No comments:

Sent via BlackBerry by AT&T 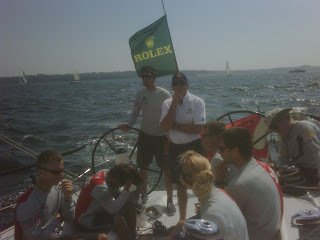 Pretty sure we were second, maybe third!!
Sent via BlackBerry by AT&T
at 9:39 AM No comments:

EVENTS WHERE AMATEURS ARE RECOGNIZED
(September 12, 2011) - The grounds of New York Yacht Club's renowned Harbour Court clubhouse in Newport, Rhode Island, were filled with sailors from around the world, who are set to begin racing tomorrow (Tuesday) in the second biennial New York Yacht Club Invitational Cup presented by Rolex.

The 22 teams, representing yacht clubs from 16 nations and six continents, have traveled far and wide to get to Newport. The teams, especially those less familiar with the Swan 42 class, enjoyed several perfect practice days with today's 12-14 knot southwesterly breeze, under sunshine and brilliant blue skies, appreciated by all competitors, especially those from some more sunshine-challenged locales

The Swan 42s, an ultra competitive one-design class, were conceived by the NYYC as the yacht club's ninth one-design class since its' founding in 1844. The New York Yacht Club Race Committee, led by John "Tinker" Myles, Jr. ran several practice starts today for the fleet.

Racing will run from Tuesday, 13 September through Saturday, 17 September.
A total of eleven (windward-leeward) races are planned, with no throw-outs.
Racing will take place off Newport, R.I. on Rhode Island Sound or in Narragansett Bay.

One of the first teams to arrive in Newport was Clube Naval de Cascais from Portugal, with skipper Patrick Moteiro de Barros. The team has been on-site for over a week practicing on their chartered Swan 42 Orbit, and making the most of coach Bill Shore's expertise and local knowledge. de Barros commented, "The goal is to do the best we can, and we're here to win. We may not win, but that's the motivation."

To that end de Barros, who is a four-time Olympian, has assembled a crew that at its' core are very competitive Dragon sailors. Included in this mix is tactician Henrique Anjos, a three-time Portuguese national champion in the class. With no Swan 42s available locally, the team came up with a clever alternative last spring, chartering a Dufour 40, and adding a bowsprit to it so they could fly an asymetrical spinnaker.

De Barros is no stranger to Newport, having sailed here in the 1980s when he was the helmsman on Magic, the trial horse for Dennis Conner's Freedom.
The team had hoped to participate two years ago, but couldn't come, and the appeal of the event is clear to de Barros who added, "The Invitational Cup is totally Corinthian, and I think it's important to have events where the amateurs are recognized. This is one of the most prestigious yacht clubs in the world, and I think events like this should carry on." -- Read on:
http://tinyurl.com/NYYC-IC-091211

Invitational Cup - Not to brag, but... 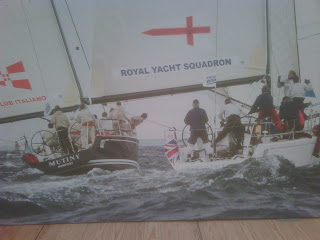 We won todays practice race!!!
Sent via BlackBerry by AT&T
at 12:14 PM No comments: 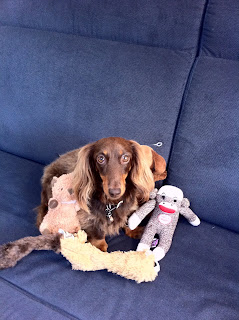 Here's one of Ita! All is good on the boat. Ita and I have been spending a lot of quality quite time on the boat while Jim's racing. Which movie will I download today???
at 6:07 AM No comments: 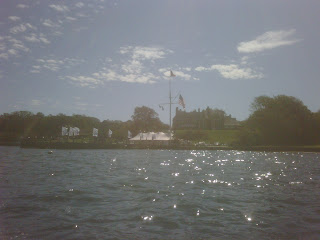 New York Yacht Club's second biannual Invitational Cup is kicking in to gear.
This event includes 22 non professional teams representing their yacht clubs from around the world, and is sailed in evenly matched ,))9 Swan 42's.
I will be acting as the owners rep. on Gibb Kane's "Mutiny" and will be sailing with the team from Hong Kong.
Met most of them last night. They seem like a good bunch and I am looking forward to an enjoyable week + of great sailing.
Updates to follow....
Jim
Sent via BlackBerry by AT&T 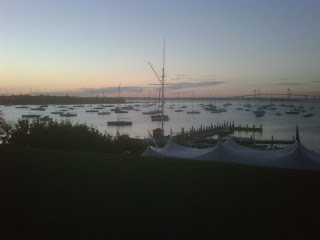 Sent via BlackBerry by AT&T
at 4:07 PM No comments:

Ita in a bucket of dog toys!!! 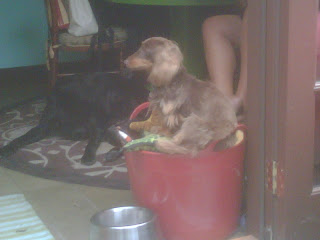 Sent via BlackBerry by AT&T
at 1:50 PM No comments:

A Good Day of Sailing 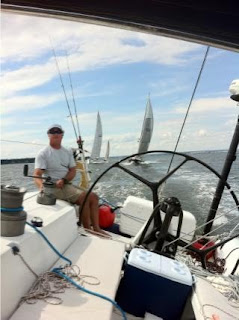 After surviving Irene with no issues, Morpheus was back in the water and anchored off the Newport Bridge by 4pm on Monday.  There was plenty to do to get her back to cruise ready status - reinstall the boom, rerun halyards, get the sails back onboard, etc, etc.

My Mother and Debbie returned from their visit to New York and we left Newport for Block Island just after noon on Tuesday.


Sunset cocktails at the Narragansett Inn, dinner at Eli's, and a stop at Aldo's bakery were next.

We left Block Island Wed. morning and made our way 35 miles to the West where we stopped at Shelter Island Yacht Club.  We are still there today, and will move on to Sag Harbor tomorrow.  A big trip consisting of 6.5 miles!