We are heading from Block Island over to Long Island today and every time we cross a tide line we have been forced to slow down and dodge giant tree trunks, branches, garbage, etc. No dead bodies yet!

Looks like the effects of Irene will be with us for a while!

Jim
Sent via BlackBerry by AT&T

Still no wind off Block Island! 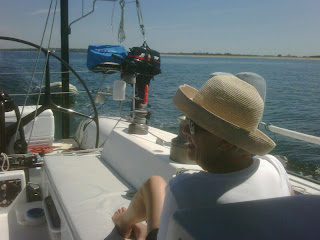 Maybe we should have come here for the hurricane...
Sent via BlackBerry by AT&T
at 8:47 AM No comments:

We are out of here! 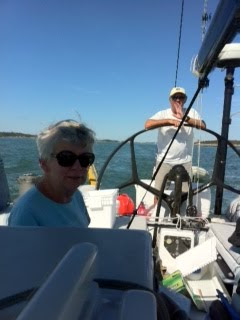 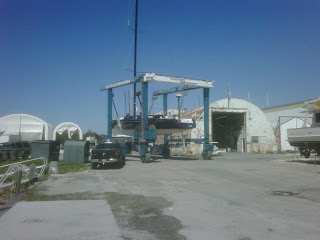 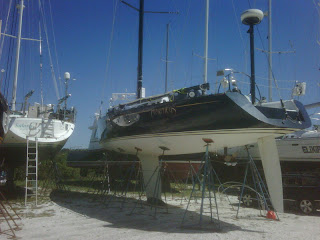 So we are looking around...
Sent via BlackBerry by AT&T
at 11:02 AM No comments:

Glad I took Morpheus out!!!
Sent via BlackBerry by AT&T
at 9:39 AM No comments: 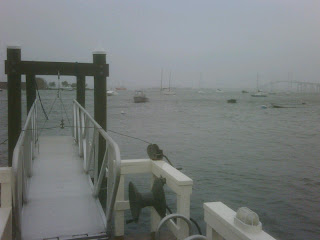 We've been watching a 25+ foot sailboat all morning. The boats jib unrolled hours ago and slowly beat itself to death. It split into at least two pieces and then the main started to get free and we thought things would get interesting. Well, I guess they did because the next time we looked out, the boat was missing both sails AND its mast!
The storm center is somewhere between here and NYC. Winds really starting to come on now. Puffs must be 50+, I wonder where they will top out?
Water level dropping but not as much as you would expect. High tide this PM will be interesting!!
Sent via BlackBerry by AT&T
at 7:46 AM No comments: 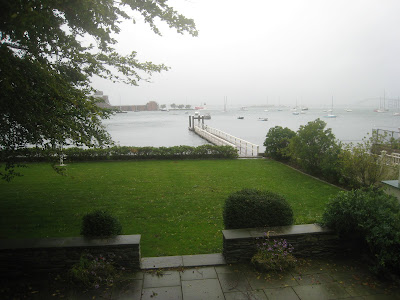 Looks like we had about a foot to go before the water reached the dock and a bit more before it started making it's way up the yard towards the house!!  High tide has passed and the water level is now dropping!!
at 5:17 AM No comments:

High tide is right around the corner.  Looks good so far.  Winds are "ok".  Computer says 45 is the highest so far.

All ok for now.

Hurricane Irene Update: What do the animals know? 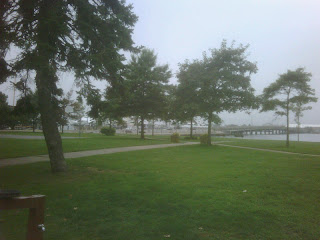 There are NO birds in Newport! They have all gone away. Strangely quiet now. Weird...
Sent via BlackBerry by AT&T
at 6:19 AM 1 comment:

Hurricane Irene: Things should ramp up from here....

Well, she's on dry land with her back to the expected wind direction and all we can do now is hope that we have prepared as much as possible.  The winds should come out of the SE, S, SW and finally the West.

Deb and my Mom are heading for high ground, I am dumb enough to stick around and think I can help the Comforts at home or the boat. 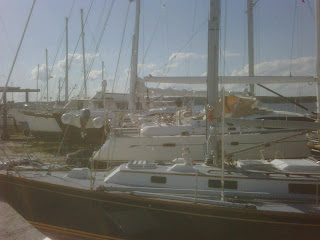 The boatyard is buzzing with activity. Boats are being hauled out as fast as the yard can make it happen, and everyone is working hard to secure their boats and equipment.
Its a beautiful day. Hard to believe that something really ugly is right around the corner!
Jim
Sent via BlackBerry by AT&T
at 1:21 PM No comments: 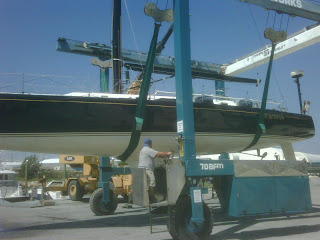 Hurricane Irene - The Calm before the Storm? 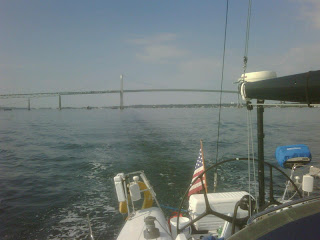 Sent via BlackBerry by AT&T
at 6:16 AM No comments:

Thanks to everyone for your calls and emails regarding our safety.  I think we've got things pretty much under control.

It's sort of a good news bad news thing right now.  The Hurricane projections are shifting West so the chances of a direct hit seem to be fading.  However, that puts us on the Eastern side of the Hurricane which is much worse than the Western side.  It will mean stronger winds and more of a storm surge which will increase an already significant tide given the New Moon on Sunday.

The balance of the American Yacht Club cruise was cancelled this morning.  This is good news for me as I had already decided to bail and head for Newport.  At least now, I will not have to worry about everyone thinking I blinked first!

We are on the list at New England Boatworks to be pulled out of the water tomorrow.  I called my insurance agent and suggested that they might want to split the fees with me.  Guess what?  They agreed!

Deb and I have spent the afternoon, taking the sails off and clearing the decks of everything possible to reduce windage.

Prior to being lifted we plan to fill our fuel and water tanks.  After getting out of the water, I will probably fill the bilge with water.  All this to keep the affect of windage on the mast from blowing our boat over on the stands.  I will also look to take halyards from the top of the mast to strong points on the ground to help with the same thing.

This is all my Mothers fault!  Or, so I will have fun claiming when I see her soon.  She was scheduled to join us Monday and apparently she dragged along this hurricane in her luggage.  It's a big disappointment as we had been looking forward to a week of cruising to Block Island, Long Island, and Edgartown.  Now the boat is probably out of the water until Tuesday best case!!

Keep your fingers crossed for Morpheus!

Most recent weather forecast below....

Eastern Long Island and Newport
1) Strongest winds, likely hurricane force (70-90 mph) around Long Island, tapering down to 50-70 mph around Newport and southern RI
a) the brunt will occur later Sat night over Long Island and Sun Newport
2) A big storm surge expected and will be a problem (maybe 9-12 ft)
3) Rainfall amounts up to 3-5'' possible
Possible winds - time is EDT and wind speeds in kts
Sunday/Mon

Hurricane Irene - Is this our future??

My Mother is scheduled to join us this Sunday on Morpheus for a week of cruising around New England.  Guess what she's going to see??

AYC Cruise - This seat has my name on it!! 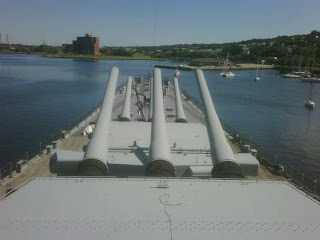 Sent via BlackBerry by AT&T
at 7:46 AM No comments:

AYC Cruise - Back on the Battleship! 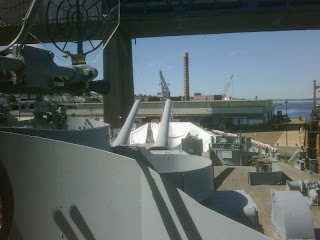 Sent via BlackBerry by AT&T
at 7:33 AM No comments:


Following her shakedown period Battleship Massachusetts went into action on November 8, 1942 as part of Operation Torch, the invasion of North Africa. While cruising off the city of Casablanca, Morocco, the Battleship engaged in a gun duel with the unfinished French battleship Jean Bart, moored at a Casablanca pier. In this battle, Massachusetts fired the first American 16" projectile in anger of World War II. Five hits from Big Mamie silenced the enemy battleship, and other 16" shells from Battleship Massachusetts helped sink two destroyers, two merchant ships, a floating dry-dock, and heavily damaged buildings and docks in Casablanca.
at 7:48 PM No comments:

I know that we post a bunch of Sunset photo's but this one, taken on the way back from Maine, is fantastic!! 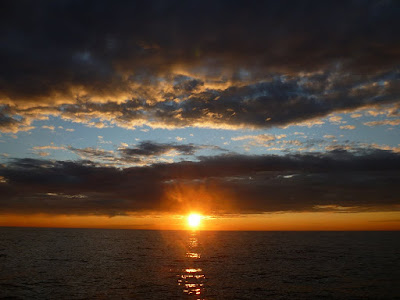 Collection of photo's from Maine 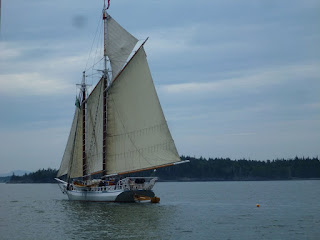 Deb and I have just finished a 28 hour delivery from Camden, Maine back to Newport, RI.
We had a great time over the past two weeks in and around Maine.  Not much access to the Internet while there so not too many posts.
Will try to get some catch-up material posted tomorrow, but for now it's time for some sleep.
Here are a couple of favorite photo's to hold you over until then!!
-Jim 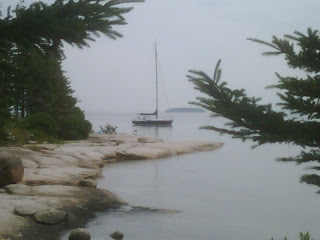 Nice!
Sent via BlackBerry by AT&T
at 8:19 AM No comments: 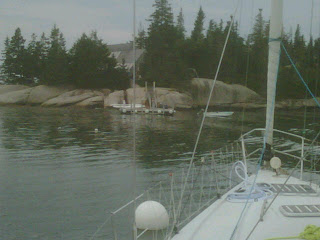 Visiting Sandy's family island in Maine - Grog Island!!!
at 8:11 AM No comments:

What a great day! 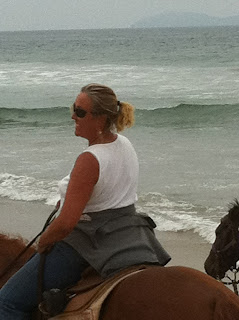 Today was my sister Sally's surprise birthday party. We spent the morning riding on the beach and the afternoon at a party with friends and family. What a great day! All that was missing was my husband and my dog!
at 7:30 PM No comments:

NYYC Cruise in Company - I "Fixed" the Autopilot!! 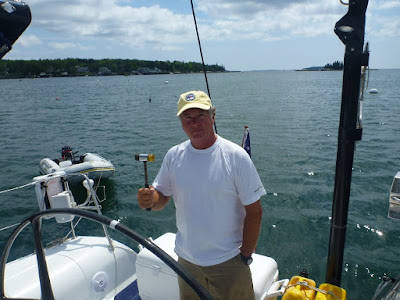 Anyone want to guess how?? 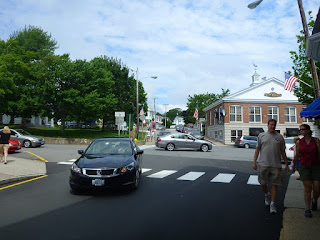 Dodging Whales. If only...

If only, the memory card on my camera had not been full, this is what the photo's would have looked like.

It was amazing and a bit terrifying at the same time!!  I had the camera going, but found out later that the memory card was full.  All I had in the end was this little bit of video.  Sorry....I was just a bit distracted....

Nantucket one day, Provincetown the next.  Is it possible to travel to two ports in one day that are more different than these two places??

Nantucket - playground for the rich, preppy, white, and straight.

Provincetown - playground where anything, and anyone goes.  Especially popular with starving artists, and those with shall we say "non standard sexual preferences".


I know this is NOT politically correct. But, coming from San Francisco we thought we'd heard it all.

That was until a good friend suggested to us that "it is local custom to back into the harbor when arriving!!"

We are still laughing about that today!!
at 6:39 PM No comments: