Catch Up: Costa Rica to Panama

Tried this last night and it didn't work out. Hopefully, today will be better.

Here is a collection of pictures and video covering our trip from Northern Costa Rica through to the beginning of the Panama Canal. It's a bit long, but my Mom says it's good! So, it must be.

This is no ordinary aircraft but a restaurant & bar!  Although the plane itself does have quite a history as part of one of the biggest scandels of the 1980's. The plane was eventually left in Costa-Rica where the locals purchased it and transformed into the “El Avion” restaurant.  See below for a more detailed and very interesting history!

From the restaurant history write up...

Nothing too special here, but some video and pictures covering our last stop in Mexico and our trip to Costa Rica. That last stop was Huatulco. This is a relatively lightly visited area by cruisers, but a very popular stop for those heading further South.

Huatulco is a very nice town that is benefiting from some serious investment on the part of Mexico's tourism authorities. Beautiful harbors and beaches, lots of inexpensive but nice places to stay, and some very nice people. If you are looking for an inexpensive but very nice vacation in Mexico, Huatulco has our stamp of approval. Check it out!

The primary reason for Huatulco's popularity with Southbound cruisers is that it is a great place to clear immigration and customs as you leave Mexico, and it is very sheltered while being the last "safe" harbor prior to crossing the much feared and rightly so, "Gulf of Tehuantepec".

We waited in Huatulco for a few days, saw a reasonable break in the high winds and headed South. All and all, it turned out very well. We saw winds in the 30's for a few hours on the morning of the second day, but by that evening things were down to the low 20's and then spent the next few days alternating between 5 and 25 knots. Not too bad, considering.

Once out of Mexico, the coastline became very interesting with lots of towering Volcano's to see along the way. Some of which were somewhat active.

Landfall was made in Bahia Santa Elena, where we spent a night anchored in the middle of a beautiful bay surrounded by dense rainforest, listening to howler monkeys and creatures we could only imagine. It WAS like being in a Jurassic Park movie!
at 4:37 PM No comments:

Tempting Fate at the Aquarium

Who let the girls out??? 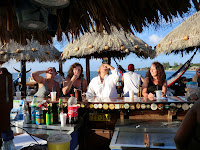 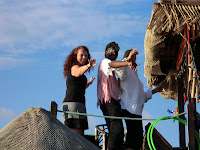 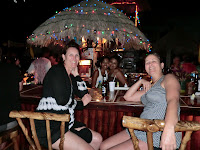 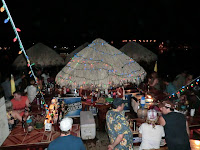 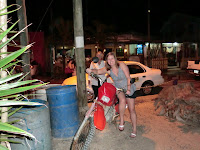 Suzanne heads out to sea! 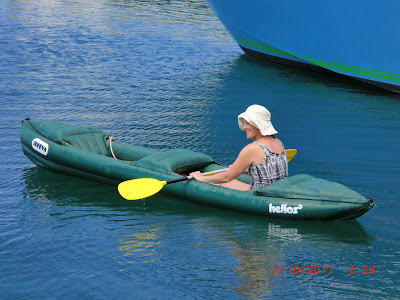 I think Denise and Suzanne are having a good time!! 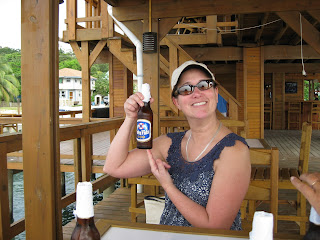 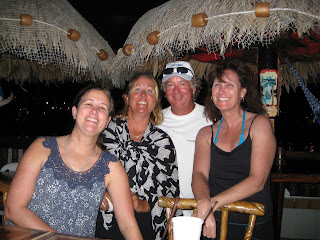 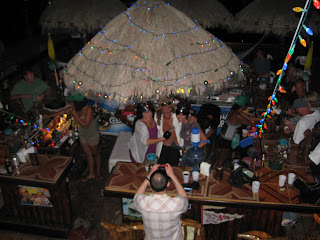 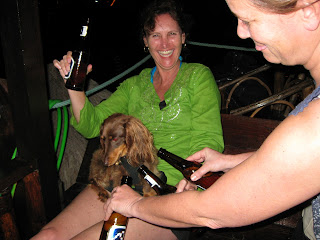 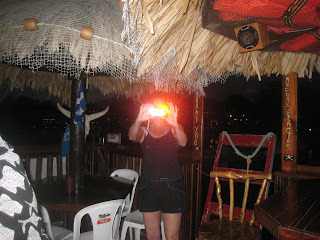 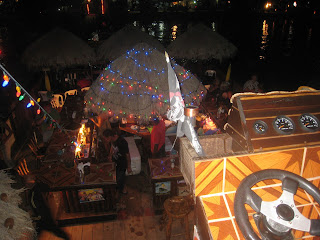 The fish that stole my lure!

Way back on Dec 23rd, I posted that a huge swordfish took my favorite lure (a plain cedar plug), bit through the line and swam off while leaping from the water 8 or more times.

Some amoung you suggested that I must have been smoking too much of the local product, and claimed that without photographic proof, my story would be ignored.

Well, here you go....and remember I had time to watch several jumps, then run below, grab my camera, turn it on and still get the footage that you see above.  This was a big angry fish with a headache!

We've fallen a bit behind sharing some pictures/video from the trip. I'm going to try to catch up while here at the dock in Roatan with solid Internet access. Here's the first of a few catch up items that should hit the blog over the next few days....
at 5:24 AM 1 comment:

It seems we are not the only ones that have seen plenty of rain. Those here are calling it the rain of their time on the island. No idea how long they have been here!!

Not happy about that.

Ita on the otherhand stood on land for the first time in a month!! She was very happy about that!!

Time to find ice, laundry, and to figure out how to clear into the country.

Squalls, Lightning, and only 12 miles to go!!

We've just turned on the engine and are now motor sailing in 5 knots of wind.
Had a good nights sail last night if you can call 30 knot squalls and lightning on the horizon between us and our destination a good night.
Despite all the forecasts, our wind held at 18 knots all night which was great for getting where we wanted to get. You just had to try not to think of that lightning.
I hate lightning!
- Jim
PS> Have heard that the local authorities are performing a search for a diver that went missing last night? We are keeping our eyes open as well...
----------
radio email processed by SailMail
for information see: http://www.sailmail.com

Sailed all night in 18-25 knots of wind. If you have to do it, this is the easy way to go - downwind with the breeze. At about 3am the showers/squalls started much like they do on the way to Hawaii. At one point, the moon had set, it was blowing 33 knots, and dumping rain. No way to see anything on deck so, I went below, closed the hatch and monitored things from the Nav Station just praying that the auto pilot would not choose that moment to go out on us. The boat was fine - steady twelves riding the waves, no issues.

This morning I was woken up by Debbie shouting "Jim, Jim, there's a waterspout in front of us!!!" Right Deb, don't panic, it's just raining really hard!! "Does really hard rain go round and round in circles???" Well, no let me see. Holy (s*&^ that IS a waterspout, which way has it been going?? "I don't know." Damn. Well, I bet they can't go upwind, RIGHT TURN and grab my video camera!! (I will be posting a video of this small waterspout tomorrow!)

All's good. Rain off and on, but warm and winds forecast to calm as we get closer.

Sometimes the hardest thing to do is to start moving again!!

Grand Cayman is such a nice spot, and that free mooring seemed so nice safe and secure!
But, we did it! We are on our way to Roatan!

19 knots of breeze blowing right at our destination. Sunny skies, and hot as usual. Feels just like racing to Hawaii only there is no spinnaker and there is a double reef in our mainsail.

Should have left on Friday

Winds and swell came up fast this afternoon, and we were not ready prior.

So...we are here until things calm down. Sunday evening perhaps??

Off for Roatan Island!

After our rush to get to the Panama Canal, we certainly have slowed down with long stops in both the San Blas Islands, and now Grand Cayman.

We are planning to leave Grand Cayman bound for Roatan Island this afternoon.

300+ miles and about two days later we should arrive.

Watch SPOT if you want to follow our progress.

New Friends & Did they really ask that???

Meeting lots of new and interesting people along the way is a great thing about trips like this.  If you are hanging out along the water, there is a good chance that you already share a few things in common with folks you run into while shopping, dining, or sitting at a waterside bar.

Tonight we ran into a young twenty something guy that told us he was 2 to 4 months away from following his dream and setting off on a multi year sailing trip.  Never mind that he'd not yet purchased his boat, or done much offshore sailing.  His plan was to island hop through the Caribbean for a year and learn by doing.

He was so excited by the prospect of this trip and interested in ours that I have no doubt that he will make it happen.  He was also super motivated to make this happen due to severe weariness with his current job running a beachside activity center and dealing with folks off the cruise ships every day.

We asked him what that was like and whether or not he got tired of the same questions day after day.  His eyes lit up and he said that was exactly what he was sick of and then told us his two favorite all time questions....

Nice guy, we hope he makes the trip!!

Picture Collection of the Day

Now that our friends Gibb and Tory Kane have headed home, we are beginning to prepare for the next leg of this journey.  Looks like we will be leaving this coming Thursday or Saturday.  Never on Friday!

"In some cultures, Friday is considered unlucky. This is particularly so in maritime circles; perhaps the most enduring sailing superstition is that it is unlucky to begin a voyage on a Friday" - cut out from Wikipedia.

Below is a link to a collection of pictures taken during Gibb and Tory's visit.

Roatan Island is next!!

Gibb and Tory Heading Home. Why????


No posts for the last few days.  Having too much fun with Gibb and Tory.  Our visitors for the Northeast helped to remind us just how lucky we are to be here enjoying this weather while the majority of the US is freezing!

We all had a terrific time, and they are sitting at the airport now waiting to fly home to New York.  Ugh! 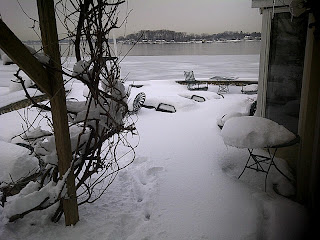 Is anyone confused about why they might be visiting???
at 8:00 AM 2 comments: 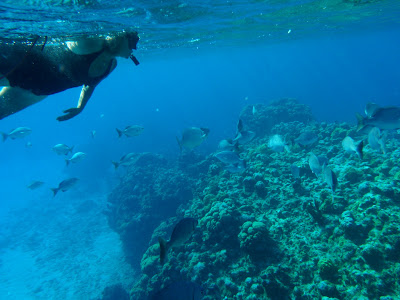 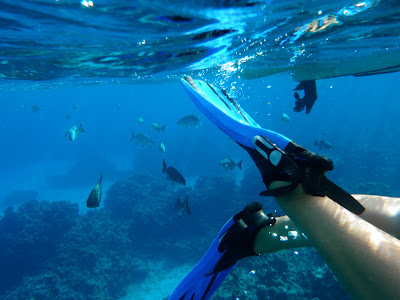 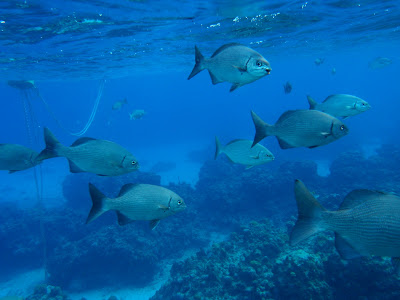