Christopher Gregory, this is right down your alley!!

Each night during the festival last week, thousands of people would gather in the city hall plaza waiting to see "The Projection Show"!

I guess its one of the traditional events each year, and each year the people involved strive to make that years show better than the last. I have no point of reference here, but this was a pretty amazing feat of technology and animation.

My first thought was that showing a video on a complex building front would ruin any effects. But, those designing the show were way ahead of me. I don't know how, but they built the animation to actually take advantage of the structures (e.g. the pillars) on the building. The building actually enhanced the show.

You guys are going to burn!!

As Debbie and I wandered around just prior to the start of the "Parade of Fire!" during the Barcelona MERCE Festival, we started to notice people in hooded sweatshirts, wearing sunglasses (at night), and bandana's covering their faces.  Humm, interesting.  It's 80+ degrees out, these are funny outfits.

We'd read about this parade, but ultimately you need to see it to understand it.  Clearly, this event would be illegal in any other place that I've ever visited.  It's more than a bit convenient that Barcelona was basically built of stone!!

Just minutes before the start of the parade, and only a block from the kick-off float, a nice guy came up to us.  Looked at our shorts, short sleeved shirts, and asked "Do you guys understand what is about to happen here??"  We assured him that we did, and that we planned to keep a safe distance from the fireworks.  Ha!!  What's few sparklers between friends???

Then the devil's drums kicked into gear, and another equally friendly guy came up to us and was a bit more direct.  "You guys are going to burn!!!", he said.  You need to move much farther away....

It turns out they were both right, and we had no idea what we were about to see.

The parade started.  We ran for cover!!

We are glad that we stayed to enjoy this Festival.  The town has certainly gone a bit crazy, but its been fun to be in the middle of it.

I'll put something better together soon, but for now here's a bit of what we've been seeing


Human Towers up to 9 people high! 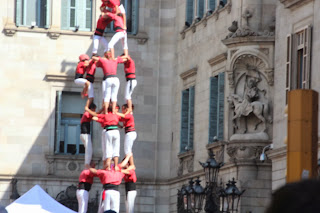 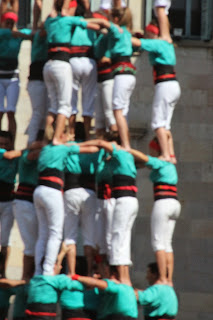 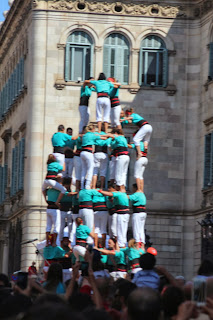 Otherwise known as the parade of fire!! 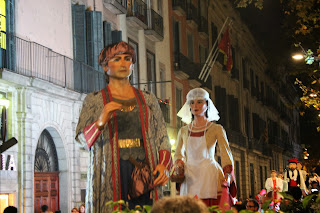 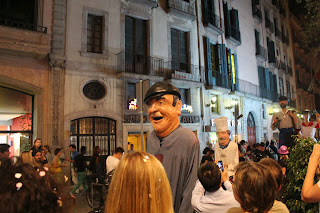 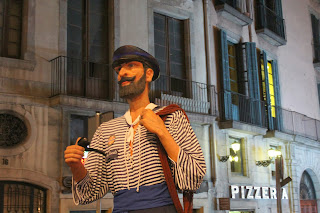 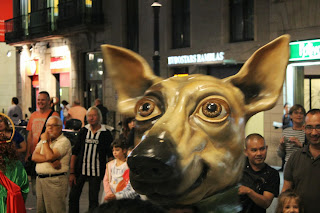 We are in an IRISH pub, in SPAIN, getting ready to watch the AMERICAS cup, and cheering for NEW ZEALAND! 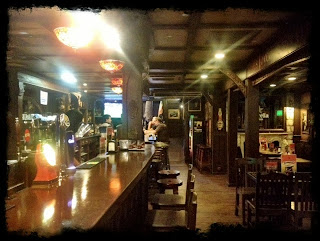 Big festival in town this weekend!  Parades, music everywhere, and way too many people.  But, still lots of fun!! 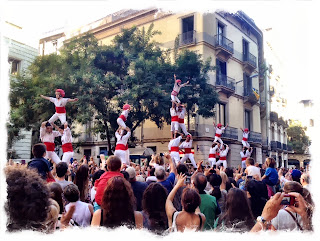 It would be very difficult to visit Barcelona without hearing the name of the famous architect Antoni Gaudi and seeing some of his creations around this city.
A number of his buildings are included in the World Heritage list.  Seven of those are in Barcelona.The seven buildings are: Parque Güell; Palacio Güell; Casa Mila; Casa Vicens; Gaudí’s work on the Nativity façade and Crypt of La Sagrada Familia; Casa Batlló; Crypt in Colonia Güell.
While I’m not a big fan of his “unique” style, I am impressed with the engineering side of some of these creations.
For those of you that like his style more than I do, here are some pictures of his work.