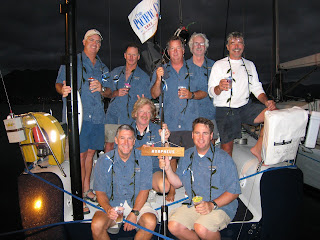 Morpheus crossed the finish line yesterday at 3:00am just ahead of a group of boats and another set of squall clouds! The adventure was over, but our day was just beginning.

At the 25 mile checkin, the race committee asks you how many people you have onboard. To many this seems a strange question, but we knew the code. They need the number to figure out how many Mai Tai's to meet you with at the dock. We answered that there were 32 onboard expecting, a laugh and a request for a correction. Instead, the radio operator confirmed 32 onboard, and our hopes soared!!

One of the boats behind us was "Pegasus". When they crossed the finish line, they found that their spinnaker halyard (which had probably been up for 7 days) was stuck at the top of the mast. With a reef aprox. one mile beyond the line, that's not really a good thing. In the confusion that followed our escort boat wandered off to help them, and we were left with the choice of waiting or finding our own way through the channel. The KYC Bar and perhaps 32 Mai Tai's were waiting, we found our own way in!!

The rest of the day becomes a bit of a blur, we made it to the dock without hitting anything, drank 16 Mai Tai's, and then found that the KYC bar was CLOSED!! How does that happen?? Nuff said.

We established our pole position just outside the bar door, and took full advantage of that position from the time the doors open until we left the club for our new "home" in the afternoon.

Little can be said about the hours that followed. Several supply runs to the store down the street followed between swims in the ocean, lots of online catch up, and some well deserved naps!!
at 9:39 AM