I'm not sure exactly when we started, but Pete McCormick and I have had an annual bet for many years now.  Pete went to the University of Oregon, and I attended the University of California.  Historically, neither school has been a football powerhouse.  However, over the past ten years both schools have flirted with greatness.

I'm pretty sure our bet started in 2005?  Despite losing the first year, things went pretty well for me for a few years.  But, lately this annual bet has become a bit of consistently bad news for me.


One objective of my trip home last week was to "pay off" our 2011 bet.  Please note that I was smart enough not to even consider a bet this past year.

In any case, I will attempt to provide a summary this bets history below and cap it off with photographic proof of my payment this year!!  Enjoy. 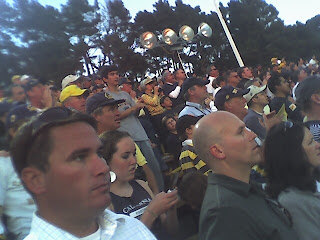 What a great game.  It was played in Berkeley and we invited Pete to sit with our group of Cal Fans for the game.  Here is a picture of Pete enjoying the first half...

The bet was a good one as well!  The first of our more creative bets.  In this case, Pete and I planned to race to Cabo in early 2007.  The bet was that after finishing the race, the loser had to stand up in a bar in Cabo, drink three shots of tequila and then sing the other teams fight song!!

For reasons that I won't go into here (it's an entirely different story), Pete was unable to "pay off" the bet on the first night in Cabo as we had planned.  But that's ok, he came back strong the next night and did an amazing job!!

Hey, this is going pretty well for me!!  In these two years, rather than looking for something short and very painful, we went for something more like a dull pain that just wouldn't got away.

Pete spent two long years with a University of California license plate holder on the back of his car!!

He was reminded of our bet every time someone saw the holder and said, "Pete, I thought you went to Oregon???" 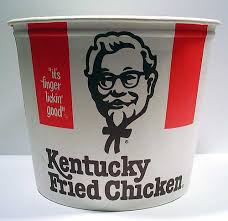 It's going to be tough to ever surpass this years bet.  The loser had to rent a chicken costume and then walk into a Kentucky Fried Chicken and order a bucket of chicken!!

I honestly can't remember what we did this year.  Perhaps it was so painful that I've blocked it from my memory???  Pete, help me out here??

Now finally on to the bet that I went home to pay off.  This was actually much tougher than the previous years Chicken Bet.  At least with the chicken, once you put the head on, nobody knew who you were.

This year, the winner was able to select an item of "fan clothing" from the winning teams online "team store", and the loser had to wear this item of clothing while taking the winner out for drinks one night in San Francisco.

Enough, is enough.  Until Cal shows some potential to at least compete with the Oregon Ducks, I will not be willing to risk further embarrassment.  Maybe in a couple of years!!!